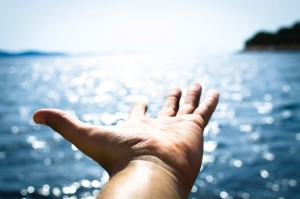 In the Christian and Missionary Alliance Statement of Faith we find this sentence: “Provision is made in the redemptive work of the Lord Jesus Christ for the healing of the mortal body.”

To understand the Biblical foundation for this belief we turn to Matthew 8 and find a story of healing. “14 And when Jesus entered Peter’s house, he saw his mother-in-law lying sick with a fever. 15 He touched her hand, and the fever left her, and she rose and began to serve him. 16 That evening they brought to him many who were oppressed by demons, and he cast out the spirits with a word and healed all who were sick.” (Matt. 8:14-16, ESV)

Notice that when Jesus touches Peter’s mother-in-law not only is she healed immediately, but she is also healed completely.  Apparently in this area of Israel Malaria was common.  We do not know if that is what she was suffering from or not, but imagine if she did have Malaria.  Even if she had been healed of the fever it still would have taken her some time to recuperate.  But in this story she immediately gets up and starts to serve them.  That is amazing.  Jesus didn’t just take away the sickness, he gave her complete health and rejuvenation and strength to the point where she was immediately able to get up and start serving her guests like a good Jewish mother in law would probably do.

There is a completeness to the healing work of Jesus that is powerfully shown in this example.  Jesus doesn’t just take away what is wrong, he brings life.  And word must have spread because soon a crowd had gathered to seek a healing touch from the Lord.

That is a powerful story, but it also provides important context for verse 17: “17 This was to fulfill what was spoken by the prophet Isaiah: “He took our illnesses and bore our diseases.”  (Matt. 8:17, ESV)

This verse suggests that there is more to this scene than just the healings that are taking place.  This is the fulfillment of a prophecy about the Messiah.  This is a declaration of who Jesus is.  And it is referring to Isaiah 53, which is known as the passage on the suffering servant.

“1 Who has believed what he has heard from us?[a] And to whom has the arm of the Lord been revealed? 2 For he grew up before him like a young plant, and like a root out of dry ground; he had no form or majesty that we should look at him, and no beauty that we should desire him. 3 He was despised and rejected[b] by men; a man of sorrows,[c] and acquainted with[d] grief;[e] and as one from whom men hide their faces[f] he was despised, and we esteemed him not. 4 Surely he has borne our griefs and carried our sorrows; yet we esteemed him stricken, smitten by God, and afflicted. 5 But he was pierced for our transgressions; he was crushed for our iniquities; upon him was the chastisement that brought us peace, and with his wounds we are healed. 6 All we like sheep have gone astray; we have turned—every one—to his own way; and the Lord has laid on him the iniquity of us all. (Isaiah 53:1-6, ESV)

This passage is a prophecy about the coming Messiah and it is easy to see Jesus in these words. Nobody would have looked at Jesus as he was growing up in Nazareth and said, look there is the Messiah.  There was no pomp and circumstance.  He was just the son of a carpenter.  And after he came out and began his ministry he was despised and rejected.  He had his life threatened and he was constantly under attack from the religious leaders of the day.  Eventually he was arrested and unjustly tried and convicted.  Then he was beaten and placed on a cross where they drove nails into his hands and feet and hung him up to die.  And on that cross he took our sins upon himself and died as a sacrifice for the world.

This passage in Isaiah 53 seems to be focusing on what Christ would do on the cross when he was beaten and pierced and killed while carrying the sins of the world on his shoulders.  Even the phrase “bearing our griefs and carrying our sorrows” from verse 4, has us picturing the cross.

But if Isaiah 53 is pointing toward Christ’s work on the cross, why is it connected to Matthew 8 which is a story about Jesus’ healing ministry?

When we look at verses 4-5 of Isaiah 53, we see that it is our sicknesses and our pain and our sin and our punishment that he takes upon himself, while he is stricken, smitten, afflicted, pierced, crushed, chastised and wounded.  And it is because he went through what he went through, while carrying all of our stuff that we get to enjoy what we see at the end of verse 5 which says, by his wounds we are healed.  That healing is complete.  Christ died and rose again in victory over sin and the curse that sin brought.

Now let me point out that because of sin, we are living in a broken world.  We treat sickness as if it is the main problem, but sickness is actually a symptom of the brokenness that has come as part of the curse of sin.  Healing sickness is actually like healing a symptom.  In Matthew 8, Jesus healed Peter’s mother in law, but she would have gotten sick again after that and eventually she still died.  Sickness is simply a symptom of the brokenness caused by sin.

While he walked this earth Jesus chose to care for the symptoms of living in a broken world, like hunger, sickness, and evil spirits.  But while he chose to address some of the symptoms he was always moving toward the main focus, which was the victory he would bring through his work on the cross and through the grave.  Things are not going to be perfect until Christ returns and wipes away this broken world and brings a new heaven and new earth.

In Revelation 21 we read: “1 Then I saw a new heaven and a new earth, for the first heaven and the first earth had passed away, and the sea was no more. 2 And I saw the holy city, new Jerusalem, coming down out of heaven from God, prepared as a bride adorned for her husband. 3 And I heard a loud voice from the throne saying, “Behold, the dwelling place[a] of God is with man. He will dwell with them, and they will be his people,[b] and God himself will be with them as their God.[c] 4 He will wipe away every tear from their eyes, and death shall be no more, neither shall there be mourning, nor crying, nor pain anymore, for the former things have passed away.” (Rev. 21:1-4, ESV)

That is what we look forward to.  One day sickness and death will be no more. But what about today? What do we do with the stuff we face right now in this broken world?  Are we stuck just looking forward to our future in Heaven?

Christ could have just walked this earth, completely focused on the cross, and ignored the symptoms of this broken world that were all around him.  But he didn’t.  He chose to stop and listen and touch and heal those in need.  Even though those healings were just temporary and he was just addressing the symptoms, Jesus still chose to heal.  Why?

Last week I was at a national youth convention for The Christian and Missionary Alliance.  As part of that convention my son Jacob and I attended a seminar led by Ken Castor.  During that seminar Ken asked the audience to shout out some things as volunteers wrote them on a giant white board.  One of the things he asked for them to shout out was things that Christ does for us.  People yelled out: he healed; he forgave; he died; and other things Christ has done.  My son Jacob just quietly said, he stopped.  And I turned to him and asked what he meant by that.  He told me that when people cried out to Jesus as he was passing by, he would stop and listen to their need and touch and heal them.  And I was like, you know what, he’s right.  That’s something that Christ did.  He stopped.  Why did he stop?  He stopped because he loved them.  He had compassion on them.  And that is still true today.  When we cry out to him Christ still stops and listens to us and touches us.

As we continue on through Scripture we see that healing was an active part of the ministry of the early church.  And down through history that has continued.  Sure there have been plenty of abuses and we have gotten off track from what it was intended to be along the way, but Christ is still our healer.

He still stops when we cry out to him.  He listens and cares about what we are going through and he touches us.  I don’t know why he sometimes chooses not to heal.  But I do know that Christ loves us and he is still our healer.  It is not our faith that heals us, it is not some guy in a fancy suit, it is not prayer or oil or the ability we have to believe, it is Christ who heals.  Through the cross he established victory over sin and death and everything that goes with it.  He came to bring us life.  And even though he no longer walks on this earth in flesh and blood, when we cry out to him, he still stops because he loves us.  Christ is still our Healer.