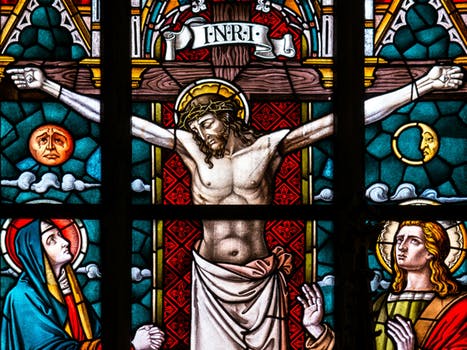 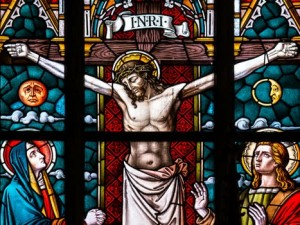 Have you ever asked yourself why there is so much of a focus on blood in the Bible?  Between the animal sacrifices in the Old Testament and Jesus’ death in the New Testament there is a lot of blood.  In church we read about the blood, we talk about the blood and we even sing about the blood.  Some people probably question why the Church seems so infatuated with blood.

First, he reminds his readers of the Mosaic covenant that existed in the Old Testament.  This was a covenant God had with Israel that they would be his people and he would be their God.  It consisted of a system of rules like the 10 commandments and others that taught them how to live and what it looks like to follow God.  This covenant also included animal sacrifices for them to offer when they messed up.

The system was not bad, but it was temporary, pointing forward to what would be completed in Christ.  And that is what the author is focusing on throughout the chapter.

He talks about the tabernacle, which was set aside as the place for God to dwell with his people.  And that tabernacle included the Most Holy Place, which was located behind a curtain that separated it from the rest of the tabernacle.  In this Most Holy Place was the Ark of the Covenant which represented the very presence of God.  Nobody went behind that curtain except the high priest and he went back there only once a year on Yom Kippur, the Day of Atonement.  On that day he would make atonement for his sins and the sins of the community by way of animal sacrifices and sprinkling the blood on the cover of the ark.

In Hebrews 9:9 we find out that this was symbolic.  The word used for symbol is a word that means comparison, from which we get our word parable.  And then verse 10 ends with the phrase, “until the time of reformation.”  That is not referring to the reformation time period in history, the word means to set or make right.

The author of Hebrews then moves on to connect Jesus to that old system of sacrifices.  He points out how Jesus became the perfect sacrifice.  In the old covenant the sacrifice of animals symbolized cleansing from sin, but in Christ those sins are truly atoned for and there is no further sacrifice necessary.

In verse 15 the author calls Jesus a mediator.  Our sin separates us from God, but Jesus came between us and God and made it possible for us to be reconciled.  And not just us but everyone, including those who made those sacrifices in the Old Testament.

Notice in verse 16 the word covenant is used and in verse 17 the word will is used.  In the original Greek that is actually the same word.  The old covenant looked ahead to the death of Jesus, the promise of what was yet to come.   Hebrews 9:15 says, “since a death has occurred that redeems them from the transgressions committed under the first covenant.”  Jesus completed or perfected what was begun with the first covenant.

The animal sacrifices that were offered in the OT had to be offered again and again.  It was not enough for them to just be done once.  It was over and over again.  But Christ’s sacrifice was complete.  What he did on the cross was perfect and atoned for the sins of all people, past, present and future, once for all.

And the author points out at the end of the chapter that Christ is coming again.  This same Jesus who died for the sins of the world and rose again is coming back and when he comes he is going to raise all those who believe in him to a new eternal life.  That is what we are looking forward to and the way we have access to that new life is through the blood of Jesus Christ.

So that gets us back to the original question, why blood?  My answer is, I don’t really know.  We can trace animal sacrifice back to the sacrifices of Cain and Abel in the book of Genesis and how the animal sacrifice of Abel was accepted while the fruit and vegetable sacrifice of Cain was not accepted.  And some even trace it back to the Garden of Eden when God clothed Adam and Even with animal skins after they sinned and realized they were naked.

But the closest answer I can find is in Leviticus 17:11 where we read: “For the life of the flesh is in the blood, and I have given it for you on the altar to make atonement for your souls, for it is the blood that makes atonement by the life.”

So while that is not an exact answer for why the blood, it does point out the importance of blood.  Blood represents life.  We need our blood to survive.  With the blood sacrifices in the Old Testament it is not like they just took blood from the animals and then set them free.  They killed the animals.  Using their blood cost them their life.

But we don’t live under the Old Covenant anymore.  God made a new covenant with his people when he sent his Son Jesus to this world.  Jesus became the perfect completion of the Old Covenant.  He died on the cross as a perfect, sinless sacrifice for the sins of the world.  His blood covers our sins.  And it is important for us to recognize the cost.

Now that we don’t regularly offer an animal as a sacrifice it is easy for us to forget the cost of sin.  We take sin lightly and therefore we take grace lightly. We forget how great a price was paid for our sin.  We tritely pray “forgive me for this or that mistake that I have made today” as if it is really no big deal.

I may not know exactly why blood, but I do know that it is good for us to remember that sin costs.  There is a price that was paid.  When we ask for forgiveness for our sins it is not like God says “oh it’s ok, don’t worry about it, it’s no big deal.”  When we ask for forgiveness, God says, “it is a big deal, it separates me from you, but I sent my son as a sacrifice for your sin, because I love you and I don’t treat you as your sins deserve, I choose to show you grace and mercy, you are forgiven.”

Let’s not ever take sin or grace lightly.  Let’s always remember that sin costs and be thankful for what Christ paid for us.