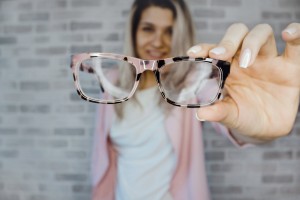 According to Wikipedia, Mr. Magoo was a wealthy, short-statured retiree who gets into a series of comical situations as a result of his nearsightedness, compounded by his stubborn refusal to admit the problem. However, through uncanny streaks of luck, the situation always seems to work itself out for him, leaving him no worse than before.

I didn’t really remember much, so I went online and looked it up and watched the opening scene which is him driving in his car and he winds up on the railroad track, then crashing through a barn, then knocking over a fire hydrant, then his car is picked up by a crane, and he lands on a roller coaster then drives off of that onto some power lines. Basically he is so nearsighted that he is can’t see anything and it gets him into wacky mishaps.

Well, today we are going to talk about how to not be like a spiritual version of Mr. Magoo. Please turn with me in your Bibles to the book of 2 Peter, chapter 1. So throughout this year we have been looking at passages brought on by questions from people in our congregation. Some of the questions have been with regard to a specific topic, but this question is simply wanting to hear a sermon on 2 Peter 1:3-11.

In this letter Peter seems to be writing to a general audience of believers. He writes about a few things, but one of them is about growing in Christ. With that in mind, let’s break this down, beginning with verses 3-4: “3 His divine power has granted to us all things that pertain to life and godliness, through the knowledge of him who called us to his own glory and excellence, 4 by which he has granted to us his precious and very great promises, so that through them you may become partakers of the divine nature, having escaped from the corruption that is in the world because of sinful desire.”

Peter talks about several different ideas in this passage so let’s break it down a little bit. What does he mean when he says “his divine power?” God’s work and His might. God is able to do more than we could ever ask or imagine. That is the power we are talking about.

And by that power, he has given us: all things that pertain to life and godliness. This means that he gives us what we need to know and follow him. So not only salvation itself, but also the power to grow as Christians comes from God. When we become Christians, not only are we brought back to a right relationship with God, we are also empowered to live for him and grow in him, through our knowledge of Christ. He has given us everything we need.

And the knowledge that Peter is talking about here is not just referring to us hearing about Jesus and believing that what we heard is true. This is referring to an intimate knowledge of Christ, where we know him personally as we have encountered him.

Then Peter refers to precious and very great promises, through which we become partakers of the divine nature. He is talking about the things God has done for us. We have been redeemed or bought with a price. We have been adopted as sons and daughters of God. We have received grace and mercy. We have been declared righteous and justified. We have been cleansed or forgiven of our sin and given new life in Christ. We have been made new creations. We have been given the Holy Spirit and look forward to an eternity in Heaven.   All of that happens in us from God through Christ.

And notice Peter points out escaping the corruption of sin. It is interesting that he uses the word escape. For me one of the things that came to mind was like Indiana Jones escaping from that huge rolling rock that was tumbling down after him during the opening part of Raiders of the Lost Ark. But this is talking about how we escape sin and the effects of sin, through Christ and we are reborn, given a new spiritual life in him.

Let’s move on to verses 5-8: “5 For this very reason, make every effort to supplement your faith with virtue, and virtue with knowledge, 6 and knowledge with self-control, and self-control with steadfastness, and steadfastness with godliness, 7 and godliness with brotherly affection, and brotherly affection with love. 8 For if these qualities are yours and are increasing, they keep you from being ineffective or unfruitful in the knowledge of our Lord Jesus Christ.”

We need to begin with the understanding that the salvation we receive is freely given and that grace is received simply by faith. Peter has just finished talking about these precious and so great promises and that we have been given all things. It is not based on anything we do. God works in us through Christ to accomplish these precious and very great promises. But here we also begin to see that there is something that we participate in after conversion. Notice that Peter says to make every effort.   That suggests that what he is talking about is not just us sitting back and waiting for something to happen, but actually making an effort.

So we could have never earned our salvation, but after coming to know Christ, we are supposed to make an effort to grow. He is calling us to active Christianity. And specifically we see that we are to add things to our faith.

We are supposed to add virtue, which means moral excellence. We are to add knowledge. Then comes self-control, which is mastery over our desires, impulses, and temptation. And steadfastness, which would be like perseverance or patience. Standing in the face of adversity. And then we have godliness which gets back to our devotion to God. Actually it is the main word from which we get the word religion. It means having a right attitude toward God and toward others. And then Peter mentions brotherly affection and then love. Brotherly affection is specifically dealing with family members. It is the word philadephia, which here in America is the city of brotherly love. It is talking about our relationship with one another within the church. But the next word that is translated here, as love is the word agape, which refers to a self sacrificing kind of love.     Seeking the highest good for others, putting others first.

Peter then says that if these qualities are ours in increasing measure then we will be less likely to be ineffective and unfruitful. I want to point out the idea of these things being ours in increasing measure. We are to be continually growing in these things. It is not that we add one of them to our lives and then we are good in that area, we are constantly growing in each of these areas and it suggests that there will always be room for growth.

Coming to know Christ is the beginning of a journey with him. And on that journey we are supposed to be growing. That is what being a disciple is all about. We are to be becoming like Christ.

How we do in these areas is not going to determine our salvation, but if we are not growing in these areas, then it might be indicative of a problem in our Christian walk.

But I am not going to be giving you 10 ways to increase your self-control or things like that today. I think there is something else for us to get out of this passage.

Take a look at verses 9-11: “9 For whoever lacks these qualities is so nearsighted that he is blind, having forgotten that he was cleansed from his former sins. 10 Therefore, brothers, be all the more diligent to confirm your calling and election, for if you practice these qualities you will never fall. 11 For in this way there will be richly provided for you an entrance into the eternal kingdom of our Lord and Savior Jesus Christ.”

Here is where the Mr. Magoo analogy comes into play. Peter calls them nearsighted because they have forgotten that they have been cleansed from their sins.   They forget what had happened to them and so they don’t continue to grow. This tracks back to what we were talking about earlier with all of the great and precious things that have been done for us through Christ and what it means to know him.

So if we flip this around, then it suggests that if we really understand the so great and precious things that God has done for us through Christ, then we will make the effort to grow in Christ.

Now I want to make two extremely important points here. First of all, it is Christ who works in us to help us grow. Remember as we talked about the opening part of this passage, God has given us everything we need for life and godliness. We can’t grow like this on our own. We rely on His work in our lives, like a branch remaining in the vine.

But also notice that we are not just passive either. This suggests an effort made by us. Verse 10 points out a diligence on our part. It means not neglecting our responsibility. We have a role to play in this, even though it is actually Christ at work in us helping us to grow, we are to make the effort.

But my focus today is not even on making the effort; I think there is something that needs to happen first.

There is an amazing reward that is awaiting us in the future; one that has been supplied or provided for us. We didn’t deserve it. It has been freely given.

No wonder someone who misses this is nearsighted and blind. They have failed to recognize how amazing it is that they have been provided for. And they have become stagnant and barren unfruitful Christians, because they have not made any effort to grow in their faith. They have been given this precious gift and rather than tending to it and helping it flourish, they have ignored it and let it just sit there.

So, I want us to realize that we have a part to play. We are to make an effort to grow. It means making the time to build our walk with the Lord. Getting to know Him, seeking Him, and choosing to go His way rather than running after other things.

So my challenge is for us to not be like Mr. Magoo. Let’s not be so nearsighted that we are blind. You know a nearsighted person would be only able to focus on what is right in front of them. It would lead to a very self-centered existence.

I am calling us to lift up our eyes and see the one who has given us these so very great and precious promises. Let’s realize the amazing things that God has given us through Christ and the incredible future we have in store for us. And let’s that move us to action, let that be the motivation we need to put in the effort to grow. All the while, let’s also recognize that even the growth itself is something that Christ will be accomplishing in us.