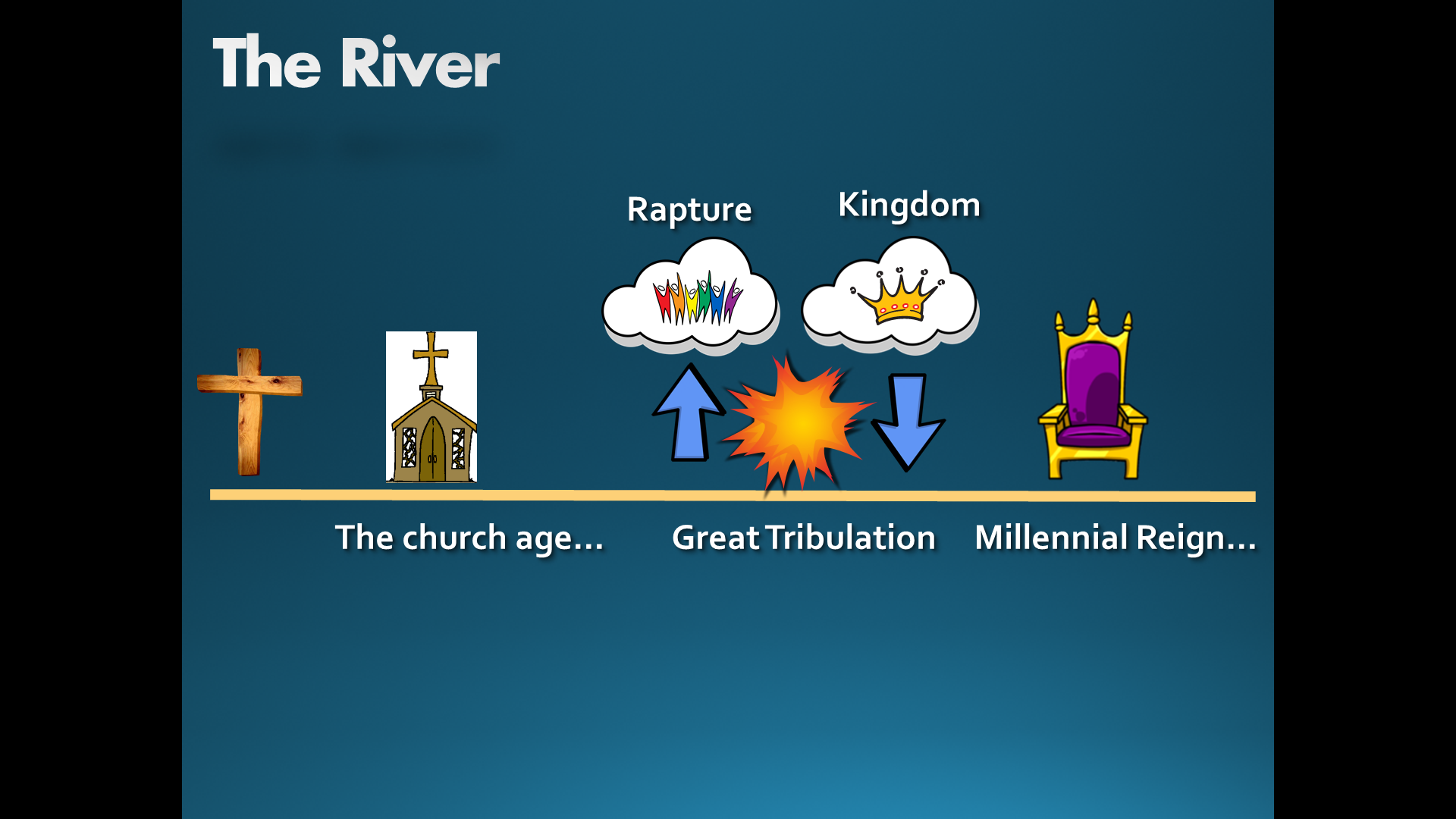 Deb Cherico and her husband John were part of The River for several years before we sent them out two years ago to pastor the church in Arlington, MN. About a week ago Deb lost her battle with cancer and her Memorial service was yesterday. I know that Deb had a big impact on many people in this congregation and she will be dearly missed. This passage is a good reminder for us in the midst of grief over loved ones we have lost.

You see in this letter Paul is writing to the church in Thessalonica and he addresses Christian grief and ties it in with the return of the Lord and what that means for those who are still alive, as well as those who have already died.

Let’s break down what he is saying here. First of all take a look at Thessalonians 13: 13 “But we do not want you to be uninformed, brothers, about those who are asleep, that you may not grieve as others do who have no hope.”

Now he uses the word asleep. This was a common metaphor for death for both Jews and Greeks during this time. So Paul wants to inform them about those who have died as Christians and what their grief for them should look like. For those who don’t believe in Christ, death represents the end of life. People are left with nothing but questions, loss, pain, defeat, separation and loneliness. Grief still exists for believers, but Paul reminds us that when we grieve as believers, it is different than when the world grieves. He is saying that when we are facing the death of a loved one, the difference between those who have Christ and those who don’t is that those who have Christ, have hope. We still mourn the loss of our loved one and the fact that they have been taken from this world and the memories and the loss and the emotional toll of not having them here with us on this earth is just as real and hard and deserves grief and mourning, but it is not the same, because we have hope. Paul is not saying that Christians should not grieve. He is saying that we should not grieve in the same way as non-Christians, because while we grieve, we also have hope.

He then goes on to explain that hope. Look at verse 14: 14 “For since we believe that Jesus died and rose again, even so, through Jesus, God will bring with him those who have fallen asleep.”

Christ died on the cross and then rose again and after appearing to many people he went to Heaven. In his death and resurrection, he brought victory over sin and death for all those who would believe in him. So those who die in Christ will one day rise with him. So there is hope, because death is not the end.

Then Paul goes on to talk a little bit about what this will look like. Take a look at verses 15-17: 15 “For this we declare to you by a word from the Lord, that we who are alive, who are left until the coming of the Lord, will not precede those who have fallen asleep. 16 For the Lord himself will descend from heaven with a cry of command, with the voice of an archangel, and with the sound of the trumpet of God. And the dead in Christ will rise first. 17 Then we who are alive, who are left, will be caught up together with them in the clouds to meet the Lord in the air, and so we will always be with the Lord.”

So this passage provides for us a beautiful picture of Christ coming down out of Heaven, descending in the clouds and a loud voice and command and a trumpet blast and the dead in Christ together with those who are living in Christ rising to meet with him in the air. What a glorious picture.

Is this saying that when someone dies they are stuck in the ground and stay there until Christ returns, and then they will rise? Lets answer that by referencing a very familiar story from the Bible and then coming back to this passage.

First of all, when Jesus addressed the thief on the cross in Luke 23, he told him “today you will be with me in paradise”. He didn’t say, when I return, I will take you to be with me in paradise, he said, today you will be with me. With that in mind, let me point out verse 14 of our passage which says that God will bring with Jesus those who have fallen asleep.I have to admit, that I don’t understand how all this works, and God’s economy of time is very different than mine, but this suggests that when our loved ones who believe in Christ die, that they are immediately in the Lord’s presence, and then when we arrive at this coming of the Lord it means that those who are still alive will rise up to join them for a wonderful reunion in the air. Whatever that looks like.

Now Paul is talking about the end times. This scene is often referred to as the rapture of the church. Now the word rapture brings up all kinds of debate about the end times. So this is tough, because I don’t have enough time to get into this too deeply, but I think it is good for us to talk about a few things in order for us to understand what this passage is saying about the rapture. So I want to give us a little timeline of events to consider and we will start it this week and continue it next week.

Right now we are living in the church age, or the time between Christ’s first coming and his second coming. We are awaiting Christ’s return. There are a lot of Scripture passages that deal with those end times, but they don’t specifically lay out for us what the end will look like. So we are left trying to piece some of it together.

Most scholars seem to agree that at some point there will be a time of trouble on this earth, referred to often as the great tribulation. We can read about that in places like Matthew 24, Revelation chapters 4-19 and in the book of Daniel. This era includes things like the anti-christ and the beast, and the seven seals and stuff like that that you may have heard tossed around.

Which leads us to the second term I want to introduce here and that is the millennium, which means one thousand years. The Bible suggests a millennial reign of Christ in Revelation 20, when Satan will be bound and thrown into the pit and Christ will reign over his kingdom here on earth. There are different viewpoints on that millennial reign of Christ, and we will talk a little more about that next time.

So we have the great tribulation and the millennial reign of Christ. Then somewhere in there we have the rapture of the church. At some point Christ is going to return and take his people up to be with him.

Basically Scripture is not completely clear on all of this, and our denomination does not take a stance on what we believe as the timing of the rapture of the church, just that it will happen at some point leading in to Christ’s millennial reign. Matthew 24:30-31

People have several different views on when and how the rapture will happen. I personally encourage you to know the Bible, read the passages, and come up with your own thoughts. Ultimately the timing of it is not as important as recognizing the reality of the rapture, which means that Christ is returning at some point to gather his people to himself for this great reunion in the skies.

And with that context in mind, we can understand verse 18: 18 “Therefore encourage one another with these words.”

These words are meant to be an encouragement for us. So let’s look at this from the perspective of someone in grief. Consider today, John Cherico, part of our extended family. He said goodbye this week to his wife. Imagine the grief going on inside of him right now. Why would he find these words encouraging? Because one day, he will be brought back together with her and with Christ. That does not mean that he won’t grieve. He is going to miss her terribly and it is going to be hard to go on without her. I am sure he has a lot of pain, and loss and loneliness and confusion, but his grief is not the same as someone who does not know Christ, because he knows that one day, there will be a reunion to end all reunions as he joins his wife and the rest of his family and friends who knew Christ and gather together with them and with Christ for eternity. That is what believers look forward to, so we have hope.
But I also think that even for those who are not in the midst of grief, this is a reminder to us of our future. Ultimately death for us and the end times, whatever the details are actually going to be, are about victory. We can look forward to the end of this world, as we know it, because it means being united together with Christ and with all of those who have believe in him throughout history. Even if today looks bleak, we know that we have a blessed hope for our future. The focus of this passage is not really to help us understand the timing of the rapture and the tribulation. It is to encourage us of the great reunion that is to come. It is to bring comfort to those in grief as we recognize the hope of the resurrection and our presence with Christ. It is to bring hope. So I encourage us all with those words.