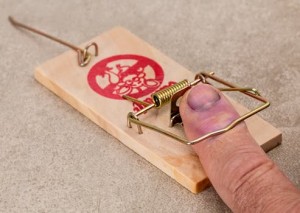 One of my best friends in college was a kid named Eric.  He was a country boy from the farmlands around Lancaster, PA.  We were very different.  He grew up hunting and fishing, hanging out in the woods and living on a chicken farm and I grew up playing games at the video arcade and hanging out at the mall.

At one point Eric had to take a speech class and one of the assignments was to give a persuasive speech.  Eric came up with the bright idea to do a speech on trapping animals.  He wanted to talk about how using traps to catch animals was actually a very humane way of capturing them.

He decided that the best way to do that was to bring a trap to class and during his speech he would set it off on his own hand to show that it was not that bad.  Unfortunately he did not practice that part and so he found out in the middle of the speech that it hurt a lot worse than he thought it would.

No doubt there are some traps that are much more humane than that trap that Eric used in speech class.  But no matter how non-lethal a trap is, the purpose is still the same.  The purpose of a trap is to lure and ensnare an unsuspecting victim.

In Luke 17:1-4 Jesus talks about traps.  He is not talking about the physical ones like Eric was referring to in his speech, but about spiritual traps and snares in the form of temptation and false teaching.

In verse 1 Jesus tells his disciples that temptations to sin are sure to come.  That means that we should expect temptation to be a normal and regular part of our lives.  The original Greek version of the phrase “temptations to sin” in this passage actually uses the word skandala which means something along the lines of a snare or a trap.  It is translated as stumbling blocks in the New American Standard Bible.  In other words it is referring to the things that trip us up and cause us to fall.

That is an accurate word picture for us.   Think about it like a snare laid out on the ground in our path that is specifically there with the purpose of tripping us up.  Because of our sin nature we see those traps as desirable, or harmless, but the concept of a trap or a snare is that it’s very purpose is to cause us to fall.  We need to recognize temptation for what it is.

We also need to realize that Satan wants us to trip and fall and that he is actively trying to destroy our relationship with God.  We need to be aware of his schemes and the traps and snares that he intentionally puts in our way.

While we are saved by grace and not by our ability to stay away from bad things, choosing to ignore God’s will and give ourselves to sin, leads us down a path away from God.  Sin is a harsh slave master.  Temptation looks all nice and pretty and desirable, but it is a snare and it leads to slavery.

Jesus goes on in verse 1 to specifically challenge us to not be the ones leading people into those snares.  When I was younger I watched movies that contained nudity.  Over the years I started specifically staying away from those kind of movies because I know that is a temptation that I should avoid.  However, when I was younger, not only did I watch those movies, I also watched them with friends or with my younger brother.  That means that I was not just exposing myself to temptation, I was exposing them to it as well.  And in this verse Jesus is saying woe to those who would do that.

In verse 2 he goes on to point out that it would be better to have a millstone hung around his neck than to cause a little one to sin.  A millstone was a heavy, flat stone that was used to crush grain.  Imagine for a moment the terrible death these words are illustrating.  And yet Jesus is saying that it would be better for that to happen than to cause one of these little ones to stumble.

I look back at my life with a lot of regrets for what I was like in high school, college, and early adult life.  It was not that I was terrible, but I probably had more bad influence on people than I had good influence and I didn’t even realize it.  I probably had heard this verse, but I never really connected the dots to myself.

We need to recognize the role we play in the temptation of others.  In verses 3 and 4 Jesus goes on to point out that it is not even enough for us to just not have a negative influence on others, we have to take it a step further.  Jesus challenges us to confront our brothers when they sin.  This means that if we see one another sinning we are not supposed to ignore it, we are to confront one another.  We don’t do this to condemn them, but to lead them to repentance.  And if they repent we are to forgive them, even if we have been wronged in the process.

These verses are a powerful reminder of the important role we play in one another’s lives.  Imagine us all walking on a path together like some kind of giant nature hike.  As we walk, we need to recognize that there are traps and snares all over the place that would trip us up and cause us to fall.  We need to be watching out for them, not just for us, but for one another as well.  We need to point out the traps as we walk and we need to be especially making sure that we are not the ones leading people into those traps.   Then, if one of our brothers falls into a trap, we should be there alongside them to help them out and to help them get back on their feet.  It is like we are walking this path together, and we care for one another along the way, helping each other on this journey of following the Lord.