Christ our Sanctifier, Part I 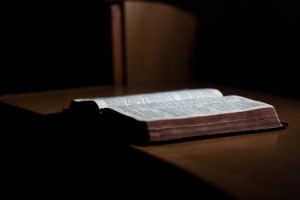 Did you know that Western Union originally rejected the telephone, saying in an internal memo in 1876, “The device is inherently of no value to us.”  In 1903, the president of Michigan Savings Bank advised Henry Ford’s lawyer not to invest in the Ford Motor Company, saying “The horse is here to stay but the automobile is only a novelty, a fad.”  In response to David Sarnoff’s urgings for investment in the radio in the 1920s, his associates said, “The wireless music box has no imaginable commercial value. Who would pay for a message sent to nobody in particular?”

Sometimes really smart people make poor decisions simply because they think some really great idea is foolish.  In I Corinthians 1:17-31 Paul talks about how the gospel seems like foolishness to those who have rejected it, but to those who are being saved it is the power of God.

From an earthly perspective the message of the cross makes no sense.  How could a man who was put to death on a cross be of benefit to anyone?  Why should someone stop going their own way and follow this Christ who had been put to death?  But the message of the cross is not just some instruction about how to live, it is about accepting the sacrifice of someone who died, to bring us abundant life.

Actually the way this is written in the Greek suggests that those who are perishing are destroying themselves, while those who are being saved are saved not by what they do, but by what is being done for them.  The message of the cross is not instruction for how to live, but life-giving power for those who believe.

Paul talks about how the Jews were looking for signs and yet when Christ came they missed him because he was not the kind of Messiah they were expecting.  So to the Jews, Jesus was a stumbling block.  They thought there was no way he could be the Messiah.  So they killed him.  Meanwhile, the Greeks were seeking wisdom.  They had the great philosophers of the day desiring to know answers to the great questions of life and the universe.  These great philosophers studied the world and applied their wisdom to life. To them the idea of Jesus was folly.

Man is very arrogant.  We naturally think we know everything and can handle anything.  We are taught from an early age to be independent.  But God turned things upside down when he sent Christ.  Through the work of Jesus Christ our sins can be forgiven and we can receive eternal life and this is a free gift that we simply receive by faith. To those who are willing respond to this seemingly foolish message and to proclaim their need for a Savior, God gives abundant life.

And notice what Paul says in verses 30-31, “30 And because of him[e] you are in Christ Jesus, who became to us wisdom from God, righteousness and sanctification and redemption, 31 so that, as it is written, “Let the one who boasts, boast in the Lord.” I Cor. 1:30-31, ESV)

So Paul is writing to a Christian group.  He is addressing the church.  And he reminds them of what has happened in their lives through Christ.  He speaks of Jesus Christ becoming wisdom from God to us.  This contrasts with the wisdom of the world.  The wisdom of the world does not have the power to save us, but Christ does, and therein lies true wisdom.

Then Paul talks about what happens in us through Christ by using three words: righteousness, sanctification and redemption. The word righteousness basically means to be put in right standing with God.  We are declared righteous by God, because of the sacrifice of Christ.  The word redemption refers to being bought back.  It suggests a ransom and that a price was paid for us.  It has ties to the concept of slavery and being bought out of that.  The word sanctification means to be separate or set apart.  Specifically in this context it would be set apart from sin and set apart to God.  It refers to our holiness or the process of holiness in our lives.

I want to dig into this word a little more.  So let me try and illustrate it visually for us. 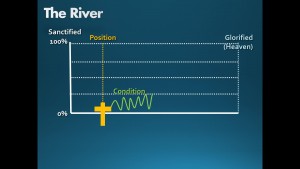 Imagine if this graph represented our sanctification, as if we could quantify it.  The top is 100% fully sanctified and down at the bottom is 0, representing someone who is going their own way, doing their own thing, not set apart for God at all.  That doesn’t mean that they are a bad or good person, but specifically whether or not they are set apart from sin and to God.

At the point of conversion, when we receive Christ into our lives, there are some things that happen to us immediately.  One of those things is that we are declared righteous, justified, or sanctified in God’s eyes because of the work of Christ.

In other words, when God looks at us, he sees us as clothed in Christ’s righteousness rather than covered in our sin.  So at that moment we are placed in the position of sanctified based on Christ’s work in our lives.  One day when we get to Heaven, we will be given new resurrected bodies and things will be like God intended, completely perfect and we will be glorified.

But between now and then, if we are honest with ourselves, while we may realize that God sees us right now positionally as sanctified, that is not the actual condition of our lives.   We know that we are not perfect.  We still sin, we still mess up, we are still not fully set apart from sin and set apart for God all the time.  If we looked at the actual condition of our lives, and how much we are living like Christ, it would probably be more along the lines of a rocky up and down kind of following of God.

The question is, do we want more than that?  I think in the church today we almost treat Christianity as if it is about praying a prayer so that when we die we will go to Heaven rather than Hell, but it does not really make that much difference in our day to day lives.  So we are okay with an up and down following of Christ.  However, if we are truly disciples of Christ, then that means that we are supposed to be in the process of becoming like the one we are following.  That is what Christ has called us toward.

And we are not just looking ahead to eternal life in Heaven, God has promised us abundant life right now.  He wants us to be victorious as we walk through this life, experiencing victory over sin, receiving his blessing and best for us today.  He wants us to be walking in a newness of life that he has for us that I think many times we fail to grasp as Christians.  And the only way for us to walk in that newness of life is by relying on the work of Christ who sanctifies us.  Sanctification is not about cleaning up our lives and doing a better job of being a good Christian it is about relying upon the work of Christ in us.  He is our sanctifier.

Think about the context of this passage.  Paul has been pointing out throughout the preceding verses, the folly of man’s wisdom compared to the power of God.  Just as we could never save ourselves we also cannot transform our lives into Christ-likeness.  We need Christ to do that in us.  Christ is not done with us at the point of conversion.  He doesn’t stop with salvation, but continues on in our lives.  He is our Sanctifier.

That flies in the face of earthly wisdom.  This world would say that it’s up to you.  You need to work hard.  You need to get it done.  You need to try harder.  It is foolishness in the world’s eyes to rely upon Christ as Savior or Sanctifier, but that is exactly what we need to do.

So what is our response?  If Christ is our Sanctifier, how do we respond to him?  That’s a great question.  Check out the next blog to find out more.