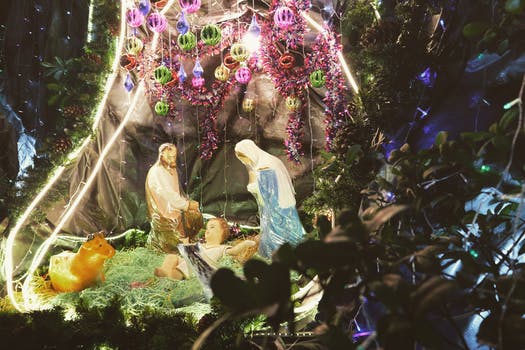 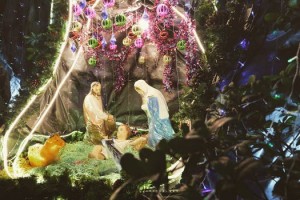 Sometimes when we think Christmas and the nativity scene we can become distracted with the types of animals, the way it must have looked, and we adapt the image in our minds to fit with what we know or can relate to. Now this is not bad, but sometimes we become so enraptured with the image that we forget the people who were involved and what it must have been like for them.

“Now in the sixth month the angel Gabriel was sent by God to a city of Galilee named Nazareth, to a virgin betrothed to a man whose name was Joseph, of the house of David. The virgin’s name was Mary.”

These first few verses are just setting the stage for what is about to happen. So we are given the time. “In the sixth month” this is referring to six months of Mary’s relative Elizabeth’s pregnancy with John the Baptist. We are also given the place “Nazareth”, and we are given the individuals involved, which are the angel Gabriel, a virgin named Mary and her betrothed Joseph.

It also gives us a little context. So at the time that Gabriel enters Mary’s life she is betrothed to a man named Joseph. Now at this time a Jewish wedding was a two stage process. First the families agreed that the man and woman were going to be married and then they went through a period of waiting of about a year before the actual wedding. During this time the man and woman were legally bond to each other, but the woman still lived in her father’s house and the couple were not to consummate their marriage.

So it seems like things for Mary are going really well. She is doing things the way she is supposed to she is taking the proper steps to begin her life with Joseph and then the Gabriel comes into play.

“And having come in, the angel said to her, ‘Rejoice, highly favored one, the Lord is with you; blessed are you among women!’ But when she saw him, she was troubled at his saying, and considered what manner of greeting this was.”

So Mary is just living her life and Gabriel pops up and says “Rejoice, highly favored one, the Lord is with you; blessed are you among women.”

After hearing this Mary reacts in a rather unusual way. I am sure she was afraid, because in the next verses Gabriel tells her not to be afraid, but when it says that she was “troubled” in the original language it means something like, confused, concerned, or perplexed. This is in sharp contrast to what we see in Luke chapter 2 when the angel appears to the shepherds. It says they “were greatly afraid” which in the original language means they feared a big fear.

Here Mary, who most scholars would say was just a teenager, is standing before an angel of God and the reaction that the author chooses to recognize is her confusion at the way the angel greets her. This makes senses because, Mary was probably young, she still lives in her parents house, and she lives in Nazareth which was a relatively small town which was not know for much at all. In fact when Nathaniel is told that the Messiah is from Nazareth in John 1 he says, “Nazareth? Can anything good come from there?”. She was probably wondering why out of all the people in the world, God would choose to bring her a message and say that God had favor on her.

So she is there trying to make sense of what Gabriel is saying and he continues in verse 30.

“Then the angel said to her, “Do not be afraid, Mary, for you have found favor with God. And behold, you will conceive in your womb and bring forth a Son, and shall call His name Jesus. He will be great, and will be called the Son of the Highest; and the Lord God will give Him the throne of His father David. And He will reign over the house of Jacob forever, and of His kingdom there will be no end.”

Then Mary said to the angel, “How can this be, since I do not know a man?”

She is probably thinking I am a virgin, how is this possible. She must have heard accounts of miraculous conceptions in the past. She would have known the story of Abraham and Sarah, and they didn’t conceive until years after the promise. She might be thinking that the baby the angel is promising will come right after the wedding or maybe even years after the wedding. Her mind must have been racing trying to understand what Gabriel was saying. When Gabriel explains in the next verses his explanation doesn’t seem possible.

“And the angel answered and said to her, “The Holy Spirit will come upon you, and the power of the Highest will overshadow you; therefore, also, that Holy One who is to be born will be called the Son of God. Now indeed, Elizabeth your relative has also conceived a son in her old age; and this is now the sixth month for her who was called barren. For with God nothing will be impossible.” Then Mary said, “Behold the maidservant of the Lord! Let it be to me according to your word.” And the angel departed from her.”

What Gabriel said was impossible. The Holy Spirit will conceive a Child within Mary. He won’t be the Son of any man but the Son of God. What Gabriel said was impossible because it had never happened in the history of creation. Even the impossible conceptions mentioned previously in the Bible did not happen this way. Sarah had Abraham. Elizabeth had Zachariah. They were still amazing but Gabriel is not talking about healing Mary’s womb he is talking about her conceive a child not by the desire of man but by the will and power of God. God is choosing to bring Jesus into the world through Mary, a virgin.

This is God exploding into creation with the greatest miracle ever known to mankind. Barren wombs producing life are miracles of healing, but the virgin birth is God ripping apart the laws of science and biology and bringing forth the Savior of the world.

People argue about the importance of virgin birth, whether it should be a primary doctrine or not but if we deny the virgin birth, if we say that it’s a little too far fetched, and God must have done it in a different way, we are denying the Creator of the world the power to bring His Son into the world by defying the very laws He established.

What Gabriel said was impossible but “with God nothing will be impossible.”

When Mary responds says, “Behold the maidservant of the Lord! Let it be to me according to your word.” She is basically saying, “God I submit myself to you. I may not understand how this is possible but I want your will to be done in me.”

The way Mary responds is amazing for two reasons. First she believes that God can do the impossible and second she is willing to accept any consequences that come along with it.

Sometimes we are afraid to spend too much time looking at Mary because the Church has a history of elevating her too highly. But just like any person of the Bible we can learn something important about how God used them. Sometimes we blow over the part where Gabriel says, “Rejoice, highly favored one, the Lord is with you; blessed are you among women!” Maybe we do this because we have heard it so many times, or we want to get to the rest of the story, or because we don’t want to glorify Mary to too high of a position.

But I think God has Gabriel include this part with His message, because after she becomes pregnant with Jesus she is not going to hear this from very many people. She is going to be caring inside her belly the most amazing miracle the world has ever or will ever see and because of it she is going to be looked down upon by almost everyone around her. Even her future husband Joseph doesn’t believer her until an angel appears to him. Why would anyone believer her? The explanation seems impossible.

Mary was not some super human, she was a young girl who wanted to please God. When Mary believed the impossible message from God, and chose to willingly submit to God despite the consequences there is no way she could have known what would become of her Child. She couldn’t have known that He would be scorned, rejected and killed be the very people He came to save. There is no way she would have known that the baby God put inside her would save the entire world. That because He came to earth and lived among us, sacrificed Himself on the Cross, and rose from the dead on the third day, all people every where could be free from their sins and live in the presence of God forever.

There is no way she could have known. But she didn’t invite God’s will to be done because she had all the answers. She did it because she believed, that the God we worship is a good, loving, gracious God, who has a perfect plan even when we don’t understand it or it seems impossible.

So going back to the two things I asked you to be thinking about at the beginning of this passage. What does this passage tell us about God?

This passage tells us that God can do the impossible. The laws of nature or science do not restrain Him. He established them. He doesn’t need us to do the impossible but wants to include us in His work. God didn’t even need Mary. If Mary had rejected Gabriel’s message, God wouldn’t have said, “Oh darn. I guess I will try again in a few thousand years.” God didn’t need Mary but because He loved her He wanted to include her. She may have gone through difficulties as a result but she got to spend more time with Jesus while He was on earth then anyone else that we know of.

What does this mean for us today?

We can learn a lesson from Mary that applies to our lives. God wants to do the impossible through us. He wants to use us to fulfill His plan to redeem all of fallen creation. But if we want to be used by God in impossible ways we need to believe that He can do the impossible, and despite the things people might say to us, or the challenges we may face on behalf of Jesus we need to submit to His will. My challenge for us today is to ask ourselves

“What impossible ways does God want to use us? And what is holding us back from submitting to Him?”